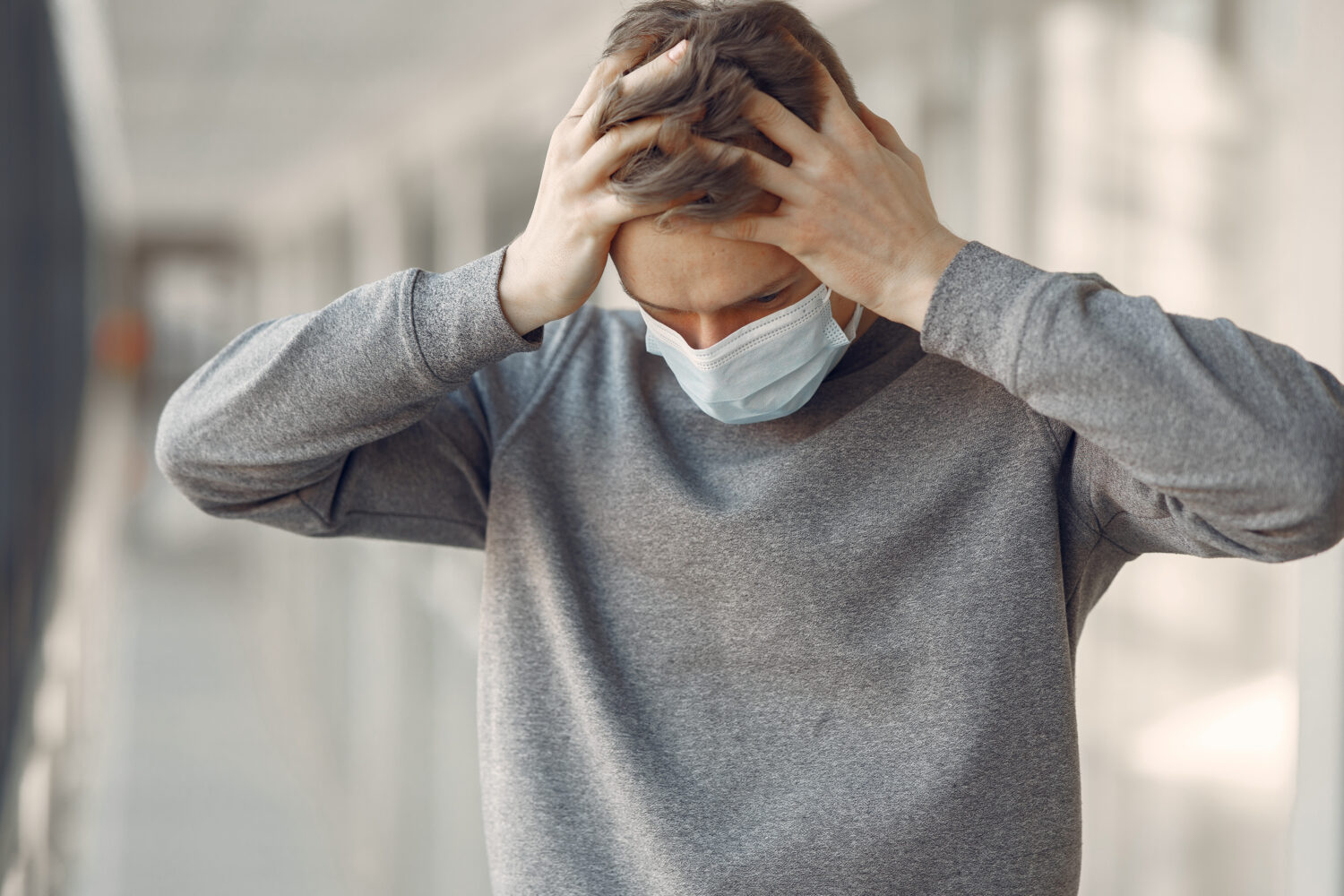 Have you noticed yourself feeling on edge lately? Easily startled? Having a hard time sleeping?

Do you oscillate between anger and tears at the drop of a hat? Maybe you feel overwhelmed and indecisive. Or preoccupied with trying to figure out what to do next but the more you try the more helpless you feel? Like nothing is in your control.

If so, you’re not alone. The current shelter in place restrictions brought about by COVID-19 have created a perfect storm for long-term, societal-wide mental health problems, chief among them being post traumatic stress disorder (PTSD). PTSD is usually talked about in terms of people that have survived a clearly identifiable trauma such as war, rape, or abuse, but it can also afflict someone who experiences chronic disorientation and helplessness such as is occuring for many with the current pandemic.

What makes an experience traumatic?

We’re wired to want a sense of control over our surroundings. We take actions on the assumption that we can predict the reaction. We go to work assuming we’ll get paid. We drive places because we assume doing so is safe. We go shopping to get food to eat. We love so we can feel connected to something bigger. All our little daily rituals give us a sense of order, security and stability, and leave us with a sense that we’re in control of our lives. And for most of us, 99% of the time that assumption goes unchallenged.

Until a trauma comes along.  An experience is traumatic to the extent that it highlights our inability to protect ourselves from harm. A traumatic experience challenges our foundational assumption that we’re in control of the things that matter most to us – family, love, personal integrity, survival.

What makes combat traumatic? You realize that you have limited control over whether you live or die that day, but you have to go forward anyway.

What makes a car accident traumatic? You realize that all those years of driving along unconsciously you were actually in grave danger every second, and now you’ll never be able to not know that.

What makes a rape traumatic? You realize you ultimately don’t have say over whether someone violates you.

What makes your partner’s affair traumatic? You realize the love and security you thought you had all along wasn’t as real as you thought.

What makes a pandemic traumatic? You’re told that any contact with any person could kill you, yet you still have to go out and you don’t have the tools to decide who is safe and who isn’t.

What makes a shelter-in-place order during a pandemic traumatic? The daily rituals you depend on for survival – your job, health routines, etc. – are taken away from you and you’re not allowed to take them back even though you’re physically able to do so.

A traumatic experience exposes our inherent vulnerability. Our unavoidable dependency on each other’s goodwill. None of us are as invincible as we may think we are, and trauma exposes that. And thus we’re left hypervigilantly scanning our environment for threats, only falling half asleep, replaying a traumatic scenario over and over in our mind, all in an attempt to try to bring a sense of order and control to a life we now are  painfully aware is – and always has been – out of our control.

How do I inoculate myself against PTSD?

Tulane’s Dr. Charles Figley, a noted trauma researcher, once wondered what distinguished those who developed PTSD after exposure to a traumatic incident from those that didn’t. He was in Florida at the time, and thus had a tragically convenient group of people to study every year as hurricanes would ravage his state.

Figley noticed that those who didn’t develop PTSD had one thing in common: they were empowered to begin putting their life back together as quickly as possible. People noticed their struggles and sprung into action to help them restore a sense of control. Insurance payouts were received quickly, friends and neighbors rallied to help. They were (literally or proverbially) given a hammer and nails and the support needed to begin rebuilding. Their innate desire to restore order to their life was given a clear path and the means to walk it. This group usually ended up fine.

How about those that developed PTSD? They were kept in an endless bureaucratic limbo that kept them from putting their life back together. They had the same restless, innate drive to restore order that the first group did, but that energy was deprived of an outlet. They weren’t given the physical and financial resources and moral support needed to do anything about their situation. Instead their limited resources forced them to sit in a hotel room for endless weeks, waiting for their insurance check to arrive while the community slowly moved on. This tortured ambiguity left them with no viable path out of their suffering, no timeline for recovery, and over time no witnesses that seemed to care. That group really struggled.

The parallels between Figley’s research and today’s pandemic are striking. People’s health and livelihoods have been taken away overnight. Many of us have been placed in a state of suspended ambiguity in which our ability to control the things that matter most are within our power to do, but just barely out of our reach. We can work to pay our mortgage, but only if the state allows it. This is a huge problem, and every bit as much of a threat to the long term health of our nation as COVID-19.

What does this mean for government officials?

You need to give people a sense of control as soon as possible. Ease restrictions so they can regain a sense of control over their life. Let them pick up a hammer and nails, so to speak. The hammer and nails are sitting right in front of them – getting back to work, re-establishing routines and social connections – but not being allowed to pick them up and start rebuilding their lives is a major trauma. It’s like going through the stresses of being homeless while sitting in the front yard of your locked house.

The long-term health risk posed by not allowing people to regain control over their situation soon is, in my opinion, commensurate with the risk of the coronavirus running unrestrained through the community.

It’s a strange time – the policies that secure our physical health harm our mental health. Some of that is unavoidable. But please know that depriving people of a sense of control over the things that matter most to them will bring heavy consequences to our collective mental health. We need to put the same urgency into figuring out how to safely get people back to work as we are into stopping the spread of COVID-19.

Either way, be sure that a mental health storm is brewing, ready to overwhelm the country’s infrastructure in the form of suicide, abuse, divorce, and a myriad of other social challenges that result when people and families are stretched past their breaking point. People need to be given control over their lives as soon as possible.

What does this mean for the media?

Only share the best facts our science has to offer. Facts that allow people to make accurate, informed decisions as they regain control of their life. Politically motivated spin is intellectually pornographic in the best of times, but in these times – when the country is so vulnerable and grasping for accurate information that can give them a sense of control – it is inhumane. It actively contributes to the erosion of our country’s collective emotional well being. It isn’t hyperbole to say it will contribute to deaths as people already near the edge make decisions based on faulty information, then experience the deep despair that comes as they realize they’ve been misled. This isn’t the time for self-serving clickbait posturing.

What steps can I take to avoid developing PTSD?

How about the rest of us? What can we do to inoculate ourselves against PTSD? The answer is to restore a sense of control to your life. The means for doing that are quite simple. First of all, answer this question:

What problem do you most need to solve in order to start regaining a sense of control?

It likely feels like a big blanket has been thrown over your world and you just want to shake it all off. And you can, but you’ll have to get specific. Chances are it feels like a million things have gone wrong. But they’re not all equally important. There will be a few that, if you could solve, would also solve a lot of your other problems. Is it the need for money? Is it the absence of a routine? Social connection? A sense of meaning? Try picturing different aspects of your life being restored – the one that brings with it the most peace is where you should start. Gaining clarity on what problem you most need to solve is crucial, as energy spent chasing your tail adds to the sense of helplessness and trauma.

Once you’ve identified what problem you need to solve, pick up the hammer and nails. If there aren’t any, keep narrowing your scope until you identify something – anything – you can do that will help you regain a sense of control over your situation. If you need more money maybe getting a job isn’t that simple. But you can start exploring other jobs or talking to people to see if you can find any leads. Then start expanding from there. Chances are there are more things in your control that it may seem. It may require looking outside your comfort zone, or thinking well outside the box, but it’s worth it. Bigger things are at play here than preserving your comfort.

Don’t wait for the government to help you. Assume that won’t happen; assume that this is on you and your tribe. If you’re a business owner, start acting right away to adapt your business to this new reality. If you’re unemployed, don’t let yourself be paralyzed for too long. Drawing unemployment will help with the necessities, but since it is 100% dependent on a program out of your control it won’t ultimately help you regain a sense of control over your life. So start strategizing, planning, moving forward in whatever little way you can, assuming that doing so will eventually lead to bigger and better opportunities. Take the time to be still and reflect, then start moving once you see a way forward.

These two steps seem obvious to a non-traumatized brain. But the traumatized brain spends so much energy scanning for danger that it often misses when it is time to stop scanning and start problem-solving.

A note on social responsibility

All this, of course, presupposes that you have access to resources to solve the problem. But not everyone does. Many among us live in a state of relative trauma daily in that we are treated as less than the majority, or struggle to access the basic resources most of society takes for granted. This crisis highlights the vast difference in privilege between the haves and the have nots. The mental health of the well-connected, highly paid professional with savings in the bank will suffer less acutely and recover more quickly than those with fewer connections, skills and resources. In other words, this crisis will only deepen the existing divides in our country if we don’t all act together. Those lucky enough to have resources have a responsibility to help as many people as possible. That’s what coping with trauma looks like for the non-traumatized – making sure you’re in the life raft pulling people in rather than on the edge of the ship watching people drown. The hole the latter will leave in your soul is much more profound than the one PTSD leaves on the brain.