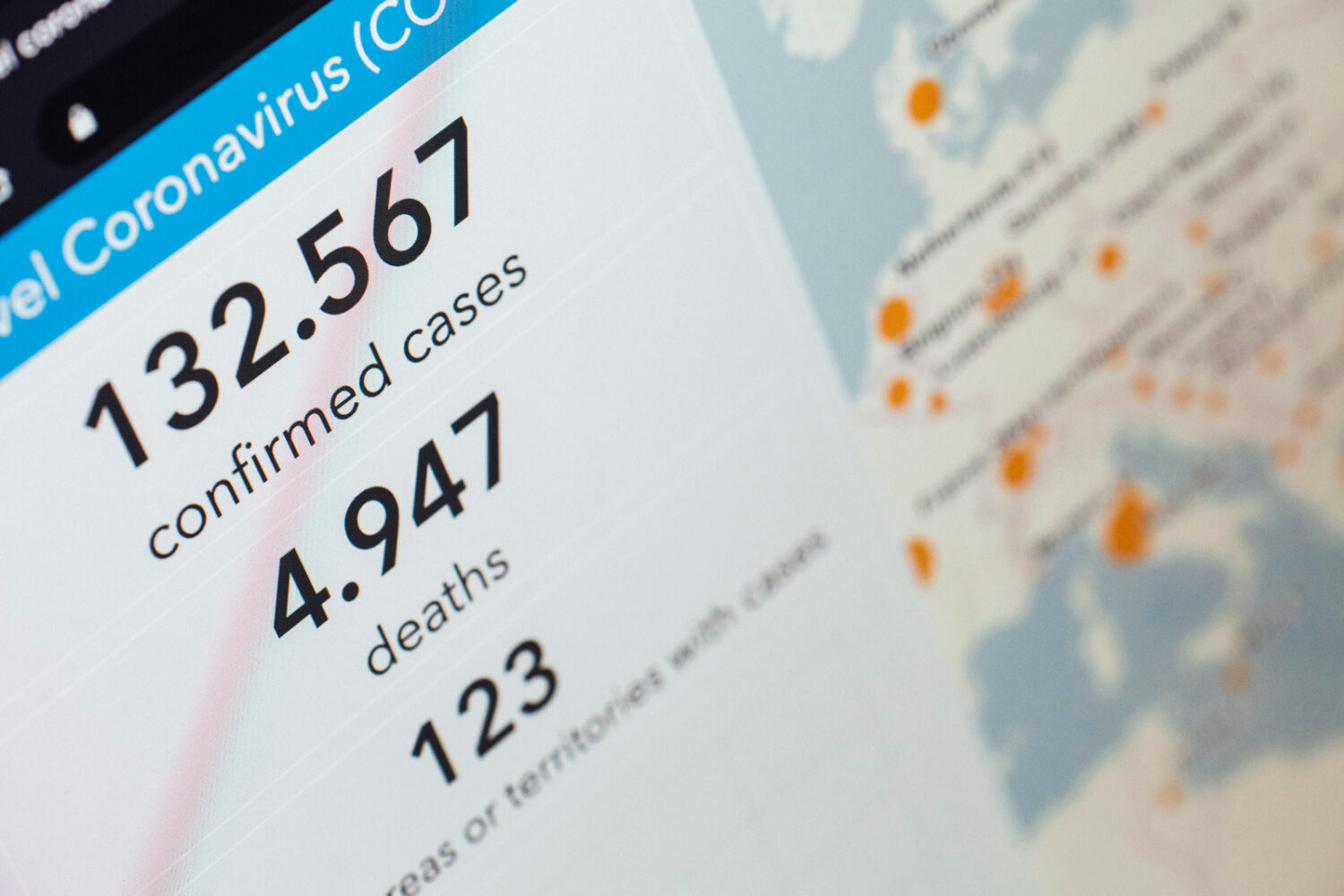 The coronavirus triggered another global pandemic that has spread far more rapidly, infected far more people, and whose effects are likely to be felt much longer than COVID-19.

That foreboding sense that something bad is looming, it will change your life for the worse forever, and you’ll be helpless to stop it. You’re not really sure what it is or how to identify it, only that it’s coming and you can’t stop it.

It manifests in poor sleep, short tempers, racing hearts, rushed decisions, poor concentration and flowing tears. It hoards toilet paper, road rages, objectifies others, and panics. In doing so it leaves the infected more alone and less able to face their challenges, thus increasing the likelihood of their fears becoming reality.

Sometimes describing anxiety as lying along a continuum from 1-10 helps. Let’s say a “1” is a person who believes everything they hear and whose hair is accordingly always on fire. We all have that person on our social media – the one who posts fifteen memes a day espousing the worst case COVID-19 scenario without any data backing them up.

If they’re a “1,” then a “10” is a person who notices others around them feeling anxiety and panicking. Perhaps they even notice themselves feeling anxiety and wanting to be impulsive. But after noticing them panic, they pause and ask themselves if the panic is warranted. They then seek trusted, reliable data to guide their response. Perhaps they still feel panic, and perhaps their actions reflect the urgency they feel, but their response feels different – it is purposefully designed to restore a sense of control to their life based on the best data they have at the time.  Their anxiety follows their rationality rather than vice-versa.

How does anxiety spread?

Anxiety spreads by infecting those most vulnerable to panic (i.e., the 1’s in our example), then proceeding up the line until it reaches the 10s. In normal times, the things that panic a 1 won’t even register to a 10. If society’s collective anxiety is around, say, a 3, then the 1 will get the 2 worked up, who will in turn get a 3 worried as well, but it’ll probably fizzle out around the 4.

But what about times when our collective anxiety is raised, such as during a global pandemic? In this case the anxiety of the 1 encounters far fewer roadblocks as it spreads up the line and, depending on the level of societal anxiety, even many 10s get caught up in the fervor. In times like these, it’s hard to know who, if anyone, is steering the ship.

What is the antidote?

The psychologist Rollo May is credited with saying, “Real freedom is the ability to pause between stimulus and response, and in that pause, choose.” That, in a nutshell, is resilience.

In other words resilience recognizing when you’re feeling off, understanding what your feelings are trying to tell you, decide whether the feelings are based in reality, and if so, figuring out what’s in your control and letting go of what isn’t.

Lack of resilience then, or emotional reactivity as therapists like to call it, circumvents rationality and immediately assumes that whatever is felt is true and must be obeyed. Every headline, every word of calamity that reaches the unquestioning ears of emotionally reactive anxiety brings panic.

How do you develop resilience?

You begin by developing the ability to pause between stimulus and response. Dr. Russ Harris has a wonderfully simple exercise for this in his book The Happiness Trap. Start by choosing a phrase that automatically brings you panic. During the pandemic maybe something like, “My loved one or I could die,” “I might not be able to find work again,” or “This may never end.” Whatever the thought is, hold it and only it in the front of your mind for ten seconds. Notice how you feel.

Then, hold that same thought in front of your mind but say “I’m thinking ______ (insert your distressing thought)” for ten seconds. Notice how you feel.

Lastly, say “I notice that I’m thinking _____ (insert your distressing thought). Repeat that for ten seconds and notice how you feel.

Did you notice a difference? People often note that the third option often feels less upsetting than the first. It’s like they’re observing themselves on a ride rather than going along for the ride.

It’s not that the goal is to not feel, or to become a walking robot brain at the expense of your heart. Rather the goal is to observe yourself feeling, and use that as but one data point in making your ultimate decision as to how to proceed.

Once you’ve slowed down and are observing your emotions, the next step is to decide whether your fear is grounded in reality. To identify the problem, gauge the magnitude of the threat, and explore what you have control over and what you don’t as you figure out your next steps.

This is much harder during a global pandemic.

The problem with a global pandemic is that it can be hard to figure out what the problem is, how to gauge the magnitude, and to know what you need to do. The world’s governments have collectively decided the situation warrants instigating one of the most intrusive measures possible – effectively shutting down the global economy and having almost everyone stay at home while the doctors, scientists, and epidemiologists figure out what to do.

That decision unwittingly gave the whole world a front row seat to perhaps the world’s largest collective science experiment. The problem is, even the best science is messy. One wave of data comes in which suggests one thing, another wave comes in which refines the previous recommendation, and so on. So one week we’re told not to wear masks, then the next week we’re told we should. And so forth. This isn’t because the scientists are inept – this is just how science works.

Which is all well and good if it’s your child’s science experiment. But when it’s your daily life, it’s bad for anxiety. It’s bad for trying to make plans, for gauging threats, for maintaining a sense of order in the midst of chaos.

Compounding this process is the media. Today’s hyper-competitive media environment leads news sources not to primarily spread the news, but rather to stay in business. This means clicks on articles, and nothing gets clicks like a panic-inducing headline and an article that exaggerates threats and undermines confidence in those responsible for solving the problem.

So how to apply the process of building resilience I mentioned above to a pandemic?

First, recognize what you’re feeling. Don’t judge it or try to make it go away. Just notice it. Give yourself some compassion for feeling whatever it is – these are weird times.

Next, see if your emotion is grounded in reality, or at least reality as we currently understand it. Nothing calms anxiety like grounded, unbiased information. So ask the right questions. What do I most need to know right now? I need to know how the virus is spread, how to reduce my risk, and what do if I get infected. Head straight to reliable sources such as the WHO or CDC to get that information. (I’ve personally found this video informative and reassuring. The hour I spent watching it helped me avoid wasting countless hours sifting for facts through news articles).

And, as it turns out, there are plenty of common sense, easy to implement measures that can virtually eliminate the chance that you’ll catch the coronavirus. Not touching your hands to your face, using hand sanitizer on your hands any time you touch something outside of your home that likely isn’t clean (e.g., a shopping cart, door handle, etc.). And so on. The point is there is actually quite a bit of solid data out there about how to avoid this. And it’s all stuff you have control over (to a degree, at least. And I realize that the more privileged a person is, the more likely they have control in terms of a greater ability to stay indoors, access to resources, etc. But pretty much everyone can make a few changes to greatly reduce their chances of getting the virus).

But what if your concern is economic rather than the virus? Losing a job isn’t just a fear for many – it’s a reality. It’s often an incredibly disorienting time. The same principles apply, however. Observe your emotions, let yourself feel what you feel, extend some compassion to yourself…then get to work. What is the risk? How long do I have before I need to have money coming back in? If it’s immediately, what short term solutions exist while I’m figuring out something long-term? In the U.S. at least, options such as Instacart, Uber, Door Dash and others provide immediate cash to anyone in a metropolitan area with a car and a smartphone.  Sure they’re not glamorous, but a man’s gotta eat.

If you have time before you need a new gig, is now a good time to pursue the new career you’ve dreamed of? Or sharpen skills in your current job? Or simply take some time to slow down and reconnect with your family before hopping back in? Whatever the next steps are, there are undoubtedly things you can do that will improve your situation and lead to more options. The trick is calming the anxiety enough to see what they are.

It’s an anxious time. There are lots of reasons to be anxious – some valid, some not. The good news is it’s in your power to slow down, take a deep breath, observe your emotions, gather accurate data, and with that data make decisions that begin to restore a sense of calm and order to your life. It’s not sexy, but the building blocks of the good life rarely are. The solution to your problem is out there, and you have what it takes to find it and act on it.